How to see all posts

A number of people have found it difficult to see the whole blog. At the bottom of each page, there is a "newer post" and an "older post" link. just click on these to see more posts. There is also a list of pages by month in the left sidebar.

The designer of this miniature Ryokan

Just a quick post today to let you all know that another girl who is building this Ryokan actually met one of the designers of it on a recent visit to Japan. She posted about it and included a photo of the prototype in her blog post Here.

A few things I found for the ryokan

I can't believe that I never put these on my blog. Sorry the picture is so terrible, but since the ryokan is in my shop, and it is so cold up there, I had to make do with this old photo from one of my phones.

When I first left the hospital, they had me go to stay with my kids in Rochester, NY. I was still pretty weak and sick, but I did go to an antique shop with them, and I found these two celluloid figures, and a cloissone vase. The figures seem to be 1/20th scale, just like the ryokan. Anyway, we were out in New York for a very long time, so I never even thought to put them here. They do look beautiful in front of the house!
Posted by kathi17 at 7:56 PM 1 comment:

I'm still hanging in there

I haven't worked on the ryokan at all, partly because of hospital visits, but mostly because of money. I did find another blog with the same ryokan. This one is in the UK, and her blog is here. She has a lot of other beautiful crafts on the blog as well as her ryokan build.

Peggy, if you see this, I just found your comment from last August, and I replied on that post. I just found the blog above from one of the comments on your Orangery when I went over to see how you are doing. I see your blog has really helped another ryokan builder!
Posted by kathi17 at 5:29 PM 2 comments:

Why I haven't posted in so long

Not long after I started the Ryokan, I began having a lot of health problems. They kept treating me for asthma, but I knew it wasn't that. Finally, last July 11th, I had my husband take me to the emergency room in a hospital in western Maine. They performed an emergency tracheostomy, and transferred me to Portland by ambulance. I was in the hospital all summer and fall, being treated for cancer. I'm still not out of the woods yet. I need a biopsy and some other things, and have been waiting for an opening to get it done for about a month now. I don't have any of my craft supplies at home now, so can't work on the dollhouse. Keeping my fingers crossed that things will get straightened out soon. Health care is in such a mess.

We never qualified for Obama care, and don't qualify more Maine care either, but the IRS thought it was fine to charge us thousands of dollars because we couldn't afford health care. I had to give up a few months worth of doctor's appointments last spring, just to pay the IRS the fines. My husband got laid off last summer, because he missed too much work, and still can't get a job, because he can't be there. Now, with almost a million dollars in hospital bills, we are going to have to choose between paying the IRS fines for no insurance in the spring, or paying hospital bills. With only $1,700 per month social security coming in, it will take months to get enough money to pay the IRS. I am terribly bitter about that, and can't stop myself from posting it here, because I am so sick of people trying to tell me that we have affordable healthcare in this country. Luckily, I turned 65 in December, so now I can get medicare. I have part B, but the bills are still adding up. Anyway, sorry for the rant about the lack of health care for those of us who were living paycheck to paycheck, but yes, it makes me mad. It also makes me mad that it wasn't considered a life changing event for me to be treated with cancer, and have to stay in a hospital four hours from my home, and having to use a feeding tube to eat, all the while my husband also was laid off and we were left with nothing but social security, and almost a million dollars in hospital bills. Nope, the government says that's not life changing, we still didn't deserve Obama Care.

Landscaping on the left hand side

Lately I've been working on making greeting cards for a craft show I will be doing on Saturday, so I haven't gotten as much done on the ryokan as I wanted. I have been drawing out plans for a tea house, and making lots of flowers though. This photo shows some of the flowers in place. The steps down to the lower level will be behind the pergola, and there will be a pathway to the teahouse, which will sit in a garden on another piece of styrofoam. That garden will just butt up against this one, so it will be easier to move. I hope to actually be able to add a bamboo fence to the tea garden.
Posted by kathi17 at 3:05 PM 5 comments: 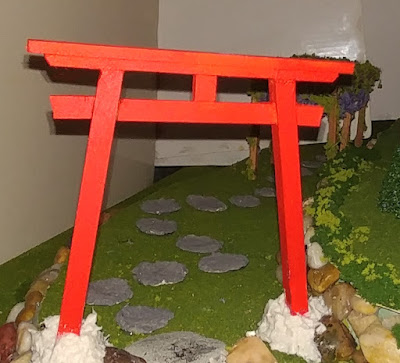 Tonight I painted and installed the torii gate. I had originally planned on sinking it into the base to make it more stable, but there really isn't room enough. Instead, I used some silicone glue to attach it and added some Celluclay to reinforce it. Once the Celluclay is dry, I'll paint it and add greenery to look like low bushes around the legs.

After that, I used the rest of the Celluclay I had mixed up to make more stepping stones. I was running out of the ones I made during the summer.

I also had a bit of a disaster. I was trying to get around the ryokan platform to get to the couch. (I told you it was too big for my living room). Anyway, I tripped over the container of stones I was using for the retaining walls and my hand landed on the corner of the base near the pond. I cracked and bent the styrofoam down in that corner, and it lifted the stream right off the base, and messed up some of the landscaping. The base of the ryokan sticks out a long way over the edge of the coffee table on all four sides, so there is nothing supporting those four sides. Anyway, I managed to even it all out. Then I pushed some boxes under that corner and used those to hold that corner up where it is supposed to be. I'll have to wait until I bring it back to the shop before I repair it, because I don't want to disassemble the ryokan again.

Once it's back at the shop next summer, I think it will stay there forever, because it's too difficult and fragile to move.

Anyway, I like the torii gate, even though it really is supposed to be the dividing area between the regular world, and the world you enter on the way to a Shinto shrine, and not on the way to a simple tea house!
Posted by kathi17 at 5:40 PM 3 comments:

Working on the torii gate 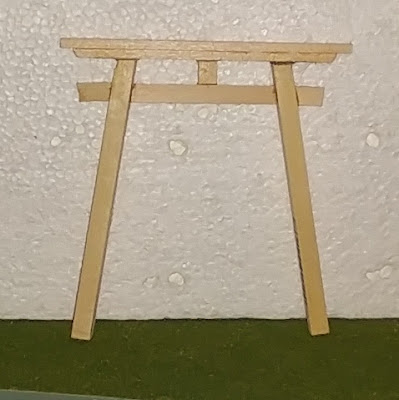 No matter how hard I try, and how many times I cut things, I can never get them perfectly straight. Anyway, this is going to have to do, because they seem to be getting more crooked every time I recut something. I'd like to make curved ends on the top, but I think I'm going to leave well enough alone. I guess it really does look like a torii, and that's a good thing! It's drying now, but tomorrow I'm going to paint it an orangey red, and then I will be able to install it!
Posted by kathi17 at 6:12 PM No comments:

kathi17
I live on a tiny island and have been married since January 1, 1971. We have one son, a lovely daughter-in-law, and three wonderful grandchildren. In the summer, my mother and I run a gift shop, and that is where I sell my cards.